Home / Love & Relationships Blog / 10 Things That Are Sexier Than Sex

10 Things That Are Sexier Than Sex

Sex is all anyone wants to talk about, read about.

What is sexy?What isn’t? Is there anything sexier than sex?

Actually, maybe there is. How about these ten things?:

According to a poll conducted by Harris Interactive, if the average person had to make a choice between sex and their tech gadgets, the tech gadgets would likely get the preferential treatment. This may sound sad, but let’s think about this for a moment. Smartphones enable people to stay in touch with the world. They entertain us 24 hours a day, and while some people might disagree, they do make our lives easier. Also, many people access sexy content on their phone.

While upwards of 30 percent of people believe their tech gadgets are an absolute essential to life, almost three-quarters would rather have food. This sounds like the better bet, considering food is essential to all life on this planet. And then there’s chocolate. Chocolate can stimulate the “happy” chemicals in the brain, and when you consider it’s 24-hour accessibility, it is easily more sexy that sex.

The old saying goes, “It is not the destination, but the journey that matters most.” The same thing can be said about the humble kiss, which, according to research, is an absolute prerequisite for romance and sex for as many as 80 percent of people. So, while sex may get all the glory, it is the kissing that decides how happy an ending you’ll receive.

While a man with a great body may be considered sexy to many women, the image of a man with a broom in one hand and dish scrubber in the other has mass appeal across all cultures. Women often turn down sex because they feel stressed, overworked and tired. So what’s sexier than a man with the body a god? How about a man who pitches in with the household chores? Are you listening, guys? If you help her out in the kitchen, she’ll be more inclined to help you out in the bedroom!

Aren’t fantasies always better than the real thing? It’s normal to enjoy several absolutely dirty, raunchy, and downright embarrassing fantasies each week. The good news is that according to studies, a vivid imagination outside the bedroom seems to equate to a rather active one when you do finally get between the sheets. And that holds true whether you are with a partner or not.

Research suggests that we find being average universally sexy. We actually associate health with an average-sized body. This suggests a healthy gene pool and we care (consciously or sub-consciously) about that when it comes to baby-making.

In a study in Belgium, researchers claim that reward behavior is driven not by just thought and sight, but by touch—especially in women. So, the idea of sex will never be as sexy to a woman, unless you preheat her oven with something she can touch—like your underwear. It sounds strange, but it will boost her reward-seeking behavior and she will be more likely to want to get freaky.

There is evidence that married couples find sex, less sexy, the longer they stay together. However, all those sexy feelings can be replaced by stability, security, empathy, vulnerability and a strong spiritual connection. Such non-sexual intimacies could easily be more sexy than sex, especially when you consider the universal and lifelong goal to love and be loved.

Whether you are a man or women, you crave human touch. Touch is a part of a great sex life, and without the simple act of holding a lover’s hand or cuddling on a couch, sex would not be as important as you think it is.

Sex sells, but it’s even sexier when fear and risk are attached to it! But studies suggest that the idea of experiencing risky sex is sexier than actually experiencing it. It doesn’t turn out to be a good time for everyone. 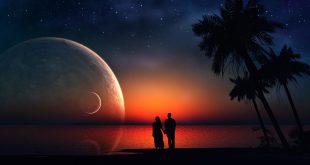 8 Ways to Manifest the Romance of Your Dreams

Chances are when you heard the word “manifestation,” you conjure the Law of Attraction.  By …